In less than 2 weeks the world has lost two of the greatest thoroughbreds of our times. I first met Ogygian when he went to stud in Kentucky at Claiborne Farm. It doesn’t seem possible that so much time has passed. He lived to be a few days shy of 32 years old. As I said in my response to Old Friends, “He was made by Damascus and embodied all the strength and beauty of the steel of the same name. Ogygian, you lived up to your name and your birthright. God graced us with your presence for 32 years. His loan was called and we must say farewell. Never good-bye.”

I can’t do this. Can’t capture such a great spirit in mere words. Or describe the emptiness of his empty paddock. I just want to say that in his last hours he was with people he knew and trusted, on a mild night under a starry sky. He ended his life peacefully. We caught the colic symptoms early, Dr. Waldridge got there soon with pain relief and gave heroically of his efforts and expertise. Everything that could be humanely done to try and save Ogygian was done, and Ogygian was strong and loving through it all. My gratitude to Michael is beyond bounds. He made the right decision not to opt for radical hospital treatment that had little chance of working, to let Ogygian go peacefully in the paddock that had been his kingdom for so many years. To make all the…

Creator was so amazing. Words cannot express the depth of his character. I am sharing Old Friends’ (bless you, Beth) obituary as the photos, story, and links need to be shared. I have added a few of my own photos of Creator. Run free, beautiful boy! I’m sure that Sunshine was waiting for you to show you to the evergreen pastures.

For three days I’ve waited for the words for a fitting tribute to Creator. They haven’t come. No words can begin to describe him, or the loss of him. 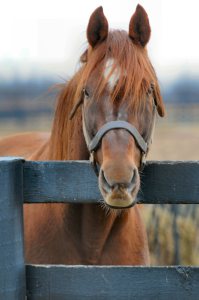 Few who saw Creator at Old Friends saw him race, but in the summer of 1990 he was the best horse running in Europe, a superlative athlete worthy of his great lineage: Nasrullah, Never Bend, Mill Reef. He was already a character. Later, one of his grooms in trainer André Fabre’s barn would tell Michael how they called Creator “Houdini” because no matter how meticulously they’d fasten on his blanket, the next time they checked on him they’d find the blanket on the stall floor. Creator’s easy victory over In the Wings in the Prix Ganay was especially celebrated. To this day, Creator is remembered in Great Britain. Here is his obituary in England’s Racing…

My dear friends at Old Friends had to say good-bye to another of their wonderful residents. Bull Inthe Heather was a great favorite of many. He was a tremendous ambassador for Old Friends. Now he runs in the permanently green grass of Heaven with his father, Ferdinand. A place where grazing, running, playing and sleeping are non-stop and there is no such thing as pain.

Bull Inthe Heather, Ferdinand’s greatest son, was an original in his own right. Readers who visited him recently know that Bully was fighting an infection, besides his tendency to abscesses, which worsened with old age. For years Bull benefitted from the best of long-term foot care from Dr. Bryan Fraley, In his final illness he also had everyday treatment from Dr. Bryan Waldridge and others of our new vet team, along with the knowledgeable, devoted care of the barn staff. During the bad weather he had the best stall in the barn, and plenty of attention and company from staff and volunteers alike. We hoped his strong spirit could prevail as it had in the past. But “old age” are the operative words in why that didn’t happen. Bull Inthe Heather was 24, equivalent to almost 80 years old for a human. Even the strongest…

The following is directly from the Press Release from Old Friends. We didn’t get to visit Jimmy when we were there in August. We had been lucky to see him at earlier visits, and he was a wonderful fella! This is such sad news for everyone at Old Friends and for the legion of “The Name’s Jimmy” fans. An additional personal observation: The Name’s Jimmy was born the same year as our first homebred – Untarnished. This hits home, too.