It’s never easy to say goodbye to a beloved family member. For many of us, the loss of a dear four-legged “kid” is as heart-wrenching as any human loss. You may wonder why I haven’t been authoring my blog for so long. Here is a large part of that reason. 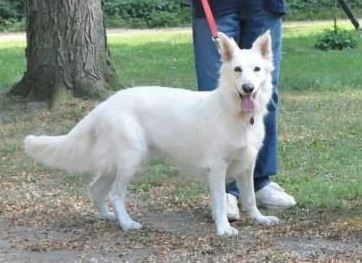 It’s incredibly hard for me to even think about this, let alone write about it; but I’ll give it a try. 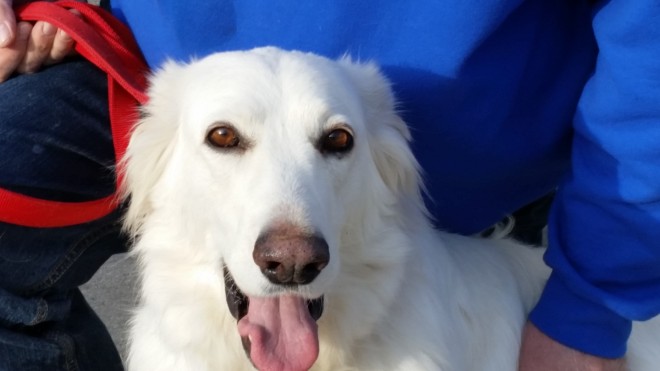 You’ve read about our Dolly girl in several previous posts. Without reprising all of that, I’ll give you a synopsis of how Dolly came to be with us.

We really weren’t looking to adopt. We had Bear and Sydney who had established a relationship over almost three years of living together. Bear had driven poor Sydney (who was a senior when we adopted her) a little crazy with his youthful shenanigans, but they had reached a comfortable status quo. Bear was a couple of weeks shy of his first birthday when we adopted him and Syd was a senior, but it worked. Sadly, though, Syd was slowing down quite a bit and Bear really needed someone to play with. Syd wasn’t a viable candidate for that anymore.

Dolly – The Face I Couldn’t Resist

One evening I was reading posts on Facebook, when up popped the photo of the most adorable, fluffy, white, German Shepherd Dog I’d ever seen. Jim had always said he would like to have a white GSD female sometime. Here was the cutest face on the planet and she was coming to Michigan. I knew in my heart that she absolutely must come live with us. She would be the white female Jim had wanted and the playmate Bear needed.

I put the wheels in motion. I started writing to Southwest Michigan German Shepherd Rescue (the organization that she was coming to all the way from California). I went to their website and filled out all the paperwork. “Dolly” (as she had been named by the rescuers in California) had been pulled from a high-kill shelter by an organization called Miracle GSD Network.

After the Miracle Network checked over our application and followed-up with our references, we were approved to adopt Dolly. Sydney, Bear, Jim, and I piled into the car and drove to meet Dolly. Everyone got along beautifully, and Dolly became part of the family. Honestly, though, she was already firmly in my heart. 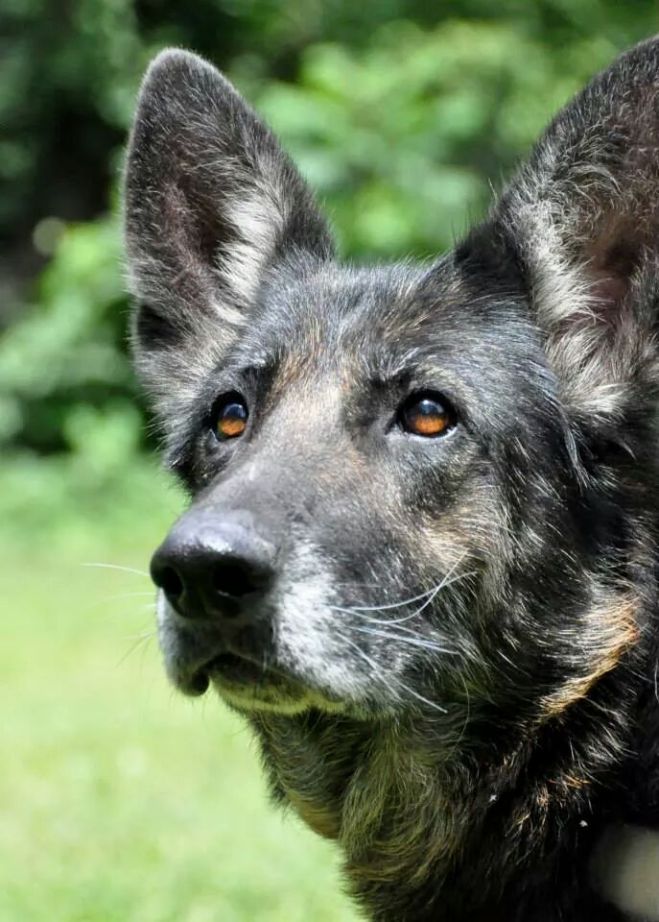 As you probably recall from previous posts, we adopted Cinder from Southwest Michigan German Shepherd Rescue in 2014. (See previous post “Cinder(ella?)” She had come to the rescue in exceedingly poor shape. She was nothing but skin and bone and her toenails hadn’t been trimmed in ages. Basically, she was a mess. Kristin at SWMGSR immediately went to work to get “Sinder” healthy. She called us as she knew we had experience with adopting seniors and had recently lost our most senior girl. Would we consider taking on another senior? 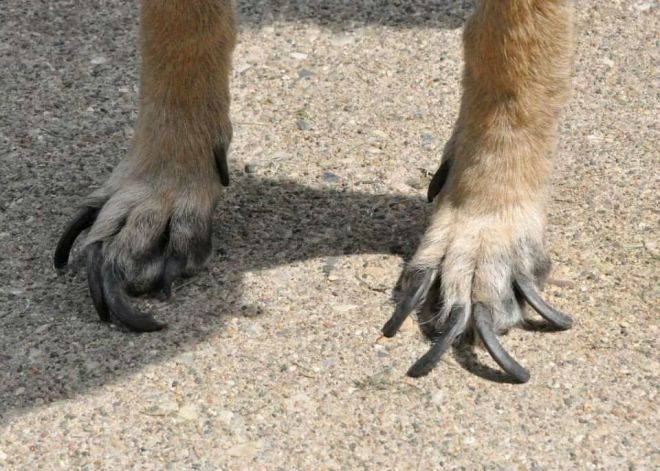 After the requisite spaying (and – in this case – nail trim), we rode out to meet “Sinder” with our Dolly (who had been adopted in April of 2014) and Bear (adopted July of 2011). Everyone seemed to get along well, so we signed the paperwork and Cinder (immediately changed her name to match her coloration) came home with us. 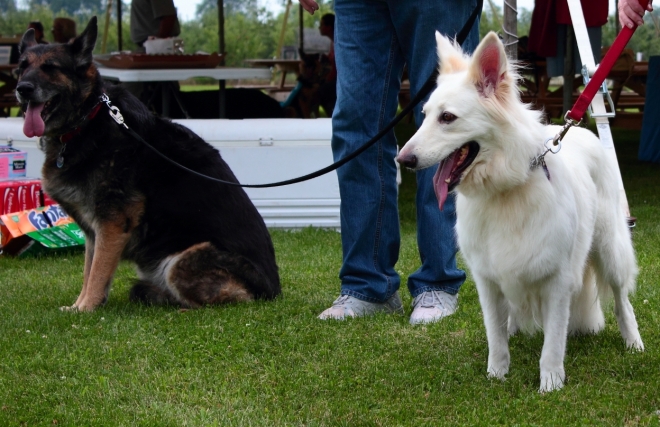 Sometime in the fall of 2015, we noticed that Dolly seemed to be “dragging” her front feet a little. She still would run, but she seemed to knuckle under frequently. Our vet thought it was possible that she had banged her shoulder into the dog door and was experiencing some weakness due to some minor nerve damage. He also cautioned, though, that we might be dealing with Wobblers’ Syndrome if she didn’t improve over a little time.

My earlier blog posts went into great detail about Dolly’s challenges with Wobblers’ and her brave struggles.

Life has a way of throwing hard, curve balls at you. How you respond to adversity sometimes tells you more about yourself than when things go well. 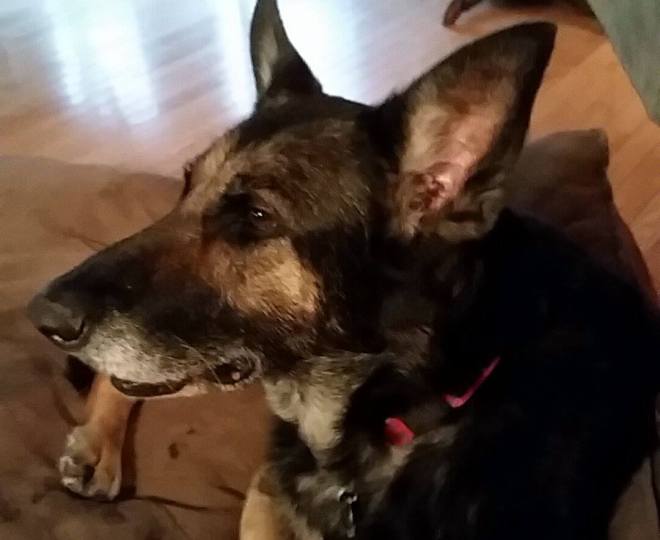 Earlier this year, Cinder started a swift decline. Her mobility became very compromised. She had difficulty getting in and out of the house. Walking for her was exceedingly difficult. She was obviously in quite a bit of pain. She didn’t even want to eat. We tried everything the vets recommended, but Cinder was telling us she was done. With a great deal of sorrow, we allowed our big girl to end her pain and suffering and go to the Rainbow Bridge in peace. 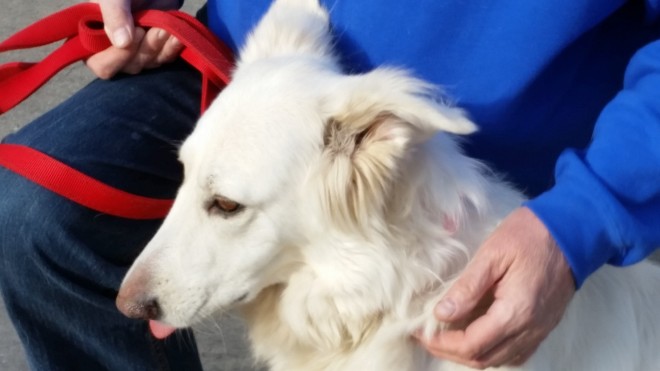 Only a month later, our Dolly dog started to experience very similar problems. Her Wobblers got to the point where she was unable to control any portion of her mobility or her internal organs. We tried helping her with a sling – which worked for a while. Within that short time, though, our Dolly gave up. She couldn’t be coaxed to eat anything. (Dolly had always been such a “chow hound.” Undoubtedly, this was due to her tough life on the streets of California before she was rescued.) She wouldn’t even try to rise. I still get a huge lump in my throat and my eyes tear uncontrollably when I remember the sad, pained look of surrender in her eyes. Once again, we had to make the decision to let her go.

It’s never easy to lose a family member. To lose two in the space of a few short weeks is almost too much to withstand. Our poor boy, Bear, was very sad and confused; but we know that he had an even better sense of the degree of the girls’ conditions and illness than we did. Letting them go was the hardest thing to do, but it was also the ONLY thing to do. Allowing them to suffer was never an option. Cinder and Dolly will always have very special places in our hearts. We will miss them until the day comes that we join them again across the Rainbow Bridge.