Having grown up (and spent most of my life) in the south, stories of hants, witches, and things that go bump in the night are part of the fabric of our beings. We’ve heard the stories, the “hear-tells,” since we were just wee little things. I don’t know that the south is any more prone to holding on to its spirits, or if it’s a result of the English/Irish/Scots long history of story-telling that keeps these tales going. Since most of the original settlers in the southern mountains were English, Irish, or Scottish, story-telling and acceptance of the unseen was as much a part of their DNA as hair- and eye-color. Thank goodness this has been passed down to today. I think acceptance of the unexplained is part of the reason so many have current-day tales of seeing, hearing, or experiencing things that give us the all-overs.

I also think that there are some folk who are just more (shall we call it) “open” to experiencing things that are perhaps from another dimension or time. I’ve heard it called “sensitive.” Whatever it is. Some of us see or hear things others do not (and, no, I’m not talkin’ about after a few snorts). Perhaps it comes from an active imagination fueled by stories from the past; but just maybe those things really are there – just out of the seeing and hearing of most folk.

I must be one of those people who is sensitive. I’ve had many occurrences of things that just can’t be explained. One of those I will recount in this post. It was something seen (and unseen until recently) on my wedding day.

Let’s go back to late July in 1986. It was hot as the blue-blazes in Georgia. We lived in Marietta (which has many a ghost story associated with it due to the War Between the States). Temperatures were well over 100 degrees and the humidity was sky-high. Frankly, it was miserable, and our wedding was planned for August 2nd.

The Thursday before we were due to be married on Saturday, as all the relatives were arriving in town, a storm hit. It was a storm like none other we’d experienced before (or after). There was virtually constant lightning followed by enormous cracks of thunder that continued to roll for what seemed to be an eternity. Rain came down in sheets and the wind blew to the point we worried about the 40- and 50-foot tall pine trees in the yard. Quite frankly, it was terrifying! The storm raged for almost an hour, then – as suddenly as it came up – it was gone.

Friday, dawned clear and cooler. By Saturday, the temperatures were very comfortable and the humidity was gone. It was a beautiful day – especially by summer in Georgia standards.

We had chosen to be married at the Planters Restaurant in Marietta, GA. This was a pre-War plantation home (previously called Bushy Park) that had survived the war and Sherman due to a pre-existing relationship between the owner and important people in the north. The owner allowed his home to be used as a hospital for Union forces. Still there were skirmishes around the home as evidenced by still-existing bullets in the framework around windows and doors.

We figured that a home that had withstood the onslaught of hundreds of troops and survived through war would be a good place to begin a marriage. We planned to get married outside under a huge, old oak which had seen the worst and was still standing proud and strong. We liked that as a good omen for a strong marriage.

Now for the “strange but true” part. During previous trips to the Planters (which was our favorite restaurant), we had seen some things that were a little “odd.” For example, one cool, early evening, we were walking up the steps to the front door when two of the rockers on the front porch started rocking ever so slowly. Now, there wasn’t a breath of air moving, so that didn’t cause the motion. We kinda looked at each other and went inside. It’s funny to me now that neither of us got the willies over that at all. There was no maleficent feeling or anything even remotely scary. It just seemed “natural.” I can’t explain why, it just didn’t seem at all frightening.

On the day of our wedding, my mother, sister, good friend and I were getting ready in one of the upstairs rooms which had been a “lady’s” bedroom. What a beautiful, sweet room it was. I felt completely at ease there. I should have had butterflies in my stomach – I was, after all, getting ready to vow to spend the rest of my life with the man of my dreams. Instead, I felt intense calm. I will say that all three of the other ladies were a little “jumpy,” but I put that down to excitement.

When the staff member in full, long, war-era dress brushed by the door and just peered in for a moment with a sweet, but almost-sad smile, I thought it was nice. Then I realized, they don’t have staff wearing period costume. My friend went to go look out the door to see what I saw and there was no motion anywhere. She did remark that the hallway felt “cool,” but nothing beyond that. 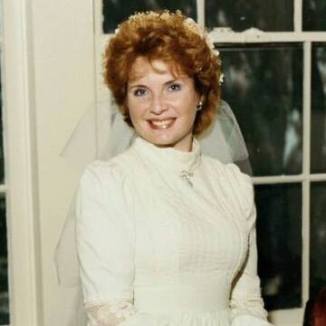 Flash forward to just this year. As Jim and I were preparing to celebrate our 31st anniversary, some friends were asking if I could share any of my wedding photos. I also put one up on Facebook. I really didn’t think anything of it – that way, until I saw it. There in the photo, looking back at the camera in the window was the unmistakable outline of the head of a German Shepherd Dog. Both Jim and I have always had affinities for that breed (as most of y’all know and can tell from my previous posts). By the way, this room was on the second floor. Was this my spirit animal watching over me? Was it a trick of light? What do you think?

I’m sad to say that The Planters is no longer a restaurant; however, the building still stands. I hope it will continue to do so for another 150 years. For those who watch over it (whether from this world or the next), I am forever grateful.